December 2015
Robert C. Knox
rc.knox2@gmail.com
I am a husband, father, rabid backyard gardener, and blogger on nature, books, films and other subjects based on the premise that there's a garden metaphor for everything. Still utopian and idealistic after all these years, I cover the arts for the Boston Globe's 'South' regional section. My poems have been published recently by The Poetry Superhighway, Bombay Review, Semaphore Journal and other journals. Some poems were also accepted for the upcoming anthology "Peace: Give it a Chance," and a collection of poems (titled "Gardeners Do It With Their Hands Dirty") will be published in 2016 by Coda Crab Books. "Suosso's Lane," my recently published novel about the Sacco-Vanzetti case, is available at www.Web-e-Books.​com.
Camp October

​
I never went to summer camp
I honed a childhood in the lots
The moon, if it was there at all,
tied up other minds in knots

October was a lava lamp
Some other way that I could be
A taste for red, a flowing wave
Somebody else, somebody free

Another day to be alive
Another path to pace the sun
October lights the golden fruit
A hand to hold, a turn redone


In the never silent city
the evening shadow spreads like a benediction,
the peace of the swelling dark
taking light's last minutes from the sky
like a seamstress picking out the stitches in
a weave too brazen
Night air drops a tone or two
grows softer, sings a cooler tune
Plants are watered, children called
The parked car lingers for an hour
half up on the sidewalk, no one cares
Lights sprinkle a hillside
turning a void into a constellation of humanity
only memory knew was there
Night squeezes from the eye
the remains of the bittersweet day
and caresses open the ear
like the tiny-footed crawl of the ant releases petals from the bud
The call to prayer blossoms
in the dark


A valiant oak overhanging,
well, everything
The low sun burning the maple crimson
as if some heat-seeking photon
shot an arrow into the earth's red heart
It hangs, crawling along the horizon
Counting the hours by millimeters
Goodbye to the flash of all that easy-living summer stuff
We go low, and deep, and into the marrow
to stir the blood roots
and pull the point from the fiery center
to light a brand
and set a blaze
to remember us by

Hang on, ancient fingers,
to the edges of things,
while the oblate spheroid on which
we spend these precious days
burns off its skin
and cauterizes its wounds
Not pain, so much,
as burned-back beauty
bought by the inch, paid for in time,
the only finite commodity that matters
Each day slips a little deeper,
sears a narrower band
of knowing

Oak is last, fittingly
few things so old
under the sun
Its great door swings slowly shut
when we're all inside

Done complaining,
we make ourselves at home

The grinning stump
eats the acorns
Will it get up
and walk to town? 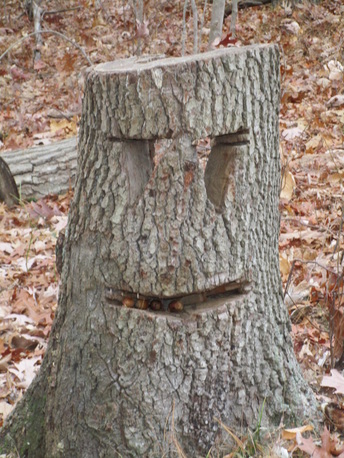